By RyanFlynn on January 9, 2013 in Freewheel 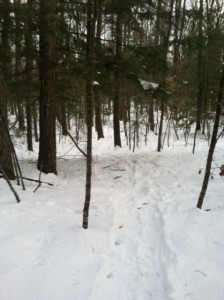 Was a Bike Trail…

Shoot, it’s the 8th, already (it was last night when I finished this)!  Well, it’s a new year and a new season.  The bike racks are off the car and in the basement, and the ski

racks have taken their place atop the roof.  It was only a week and a half ago we were out riding – some on the road, some on dirt – so frozen it may as well have been pavement, but dirt none-the-less.  We even made plans to ride the new year in with a small group ride of locals.  But, we ended up shoveling in the new year. With temps in the single digits last week, it’s tough to think about getting suited up to ride.  While I miss the bike already, it is nice to mix up the routine.  So far, the snow hasn’t been all bad.  Yeah, the bike is hanging up in the basement, alongside the racks, but the snow shoes and skis are out.But, temps in the mid 40’s is making me think more and more about the bike; especially given some pretty terrible snow conditions at the ski areas.  Oh well, it’s good to get off the bike and mix things up every few months. It’s just that biking is pretty consistent, and not as weather dependent.  I will say, leaving the office this afternoon and catching the last glimpse of the fleeting sun was inspiring – weekends full of half skiing/half riding, on the horizon, as it were, are rather appealing!

Stay strong, and stay healthy…and keep those bikes in just as good of shape.

View all posts by RyanFlynn →