By Brian Muldowney on February 26, 2018 in Freewheel 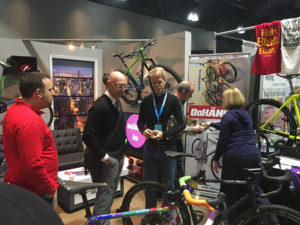 Beautiful Handmade Bikes You Have to See

Garabed and I trekked down to Hartford on February 22nd to see some of the coolest handmade bikes from all over the country. The North American Handmade Bicycle Show, which began in 2005, is the largest and oldest hand-built bicycle show in the world.  It was the first time the NAHBS was held in the Northeast and reportedly had one of it’s most successful shows, with over 143 exhibitors.  Previous shows were mostly out West, the Midwest, and Mid-Atlantic states.  Unfortunately, the NAHBS moves back west to Sacremento next year, so we had to make sure we got our fill in while we could.

We saw a lot of metal frame bikes. Whether it was titanium, lugged steel, TIG-welded aluminum, or Fillet-Brazed, each was a work of art. It was amazing to think about the amount of work that went into building each of these bikes versus the mass produced bikes you see today.

Garabed had an opportunity to catch up with Chris Chance of Fat Chance Bikes, creator of the iconic “Eastern Style” mountain bike Yo Eddy.  The two reminisced about the days when Fat City operated in Somerville, MA.

We got to see some of the awards ceremonies for the show and here is a full list of the winners: 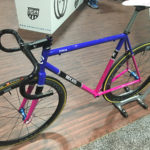 View all posts by Brian Muldowney →